[edit: this article originally stated that the October 4 public hearing would be at common council chambers. The common council has decided to do the meeting virtually, due to the ongoing pandemic numbers.]

Defunding and abolishing police have become a national conversation since the burning of the 3rd precinct in Minneapolis, but abolitionists and organizers in Milwaukee were fighting to defund police for years prior to that, and with some success. This year we need everyone involved to keep up the fight!

Why we need to defund MPD

Milwaukee Police Department (MPD) has consistently proven itself to be violent, racist, and ineffective. Each year, Milwaukee residents spend nearly $300 million dollars on policing, which represents approximately 45% of the city budget. Elected officials have divested in our communities to expand police funding. It seems they are resigned to surveillance and incarceration as the primary means for addressing social problems.

Frankly, this approach is unimaginative and violent. It shows mayor Tom Barrett and the common councils’ commitment to maintaining the status quo at the expense of Black, brown, and working class Milwaukeeans. As Mariame Kaba writes, “A ‘safe’ world is not one in which the police keep Black and other marginalized people in check through threats of arrest, incarceration, violence, and death.” One step towards actualizing a Milwaukee that is safe, and where Black and other marginalized people are not threatened by police violence, is through defunding and dismantling MPD.

Milwaukee cops are exceptionally violent. The MPD has a remarkable history of harming Black and brown communities in Milwaukee. Perhaps the highest-profile case of MPD’s overt racism is the violent arrest of Milwaukee Bucks player Sterling Brown. However, this is just one of dozens of instances where MPD’s interactions with Black people has resulted in harm. MPD officers are murderous and have taken the lives of many people in our community, including Daniel Bell, Derek Williams, Dontre Hamilton, Sylville Smith, Joel Acevedo, and Roberto Zielinski.

Many of these murders started with MPD’s practice of routinely stopping and harassing people of color. This practice got them sued by the ACLU of Wisconsin in 2018. A report prepared by an independent consultant demonstrated that 87% of frisks and 38% of pedestrian stops were conducted without reasonable suspicion of “criminal activity.” The majority of people who were stopped and frisked were Black. MPD settled that lawsuit, agreeing to change policies. Then police chief Ed Flynn resigned, helping the city try to avoid culpability. Lawsuit monitors have shown that MPD’s racist practices continue.

Racial profiling through stop and frisk programs is a problem common to many amerikan cities, but MPD takes the practice to another level. First, they are so aggressive that Milwaukee’s northside became one of the most incarcerated areas in the world. Second, between 2007 and 2012, power hungry Milwaukee cops added sexual assault to their stop and frisk routines by performing body cavity searches on the street. The chief tried to scapegoat a few officers, but later paid out a $5 million settlement to avoid greater scrutiny of the entire department.

Every stop by MPD cops is an act of violence. Those that do not end in murder or sexual assault may end in a beating or arrest and imprisonment in Wisconsin’s horrific and dangerous prisons. Or, police may simply issue tickets and fines, increasing the economic burdens on the communities they target. Every single time the police stop someone, they do so with a deadly weapon on their hip and a badge granting them broad leeway to use it. In this context, every word a cop utters is a death threat.

Even during the height of protests against policing in the summer of 2020, MPD cops refused to stop brutalizing Black people. Efforts to reform policing and stop police violence have mostly failed in Milwaukee, in Wisconsin, and nationwide. So, if increased calls for accountability, reforms like body cameras, and bans on chokeholds won’t stop police from murdering Black and other marginalized people, then what will? As abolitionists, we argue that the only way to reduce police violence is by reducing their contact with community members and giving them fewer opportunities to behave violently towards the people they claim to protect. The first step towards this goal is cutting the number of officers on our streets by cutting their budget.

Finally, the inherent violence of MPD is a significant financial burden, as evidenced by the nearly $21 million dollars spent between 2015 and 2017 on misconduct settlements. It is clear that if resources shifted away from policing, and towards meeting people’s basic needs, the quality of life would improve considerably for people in Milwaukee.

Actions you can take to support the demand to defund MPD:

Fortunately, there is a robust and growing campaign to defund MPD, and now is the time to get involved. On Juneteenth 2019, the African American Roundtable (AART) launched the Liberatemke campaign, which successfully wrested millions from MPD that year and the next, investing the funds into community needs and actual public safety. This year, let’s make the trend continue and expand!

The Milwaukee common council is currently reviewing mayor Barrett’s proposed budget, and will hold a public hearing at 6:30pm on October 4. The meeting will be online due to the pandemic. Register here. The more people we have packing the meeting that evening, the harder it will be for common council to refuse our demand to defund police. Mark your calendars, bring friends, and prepare your testimony!

Some events this week to prepare:

The common council’s finance and personnel committee will be having tons of meetings, evaluating and amending the proposed budget throughout October. On Oct 28 & 29 they will finalize the budget, and pass it on November 5. Contact your alderperson to demand they defund $75 million from MPD and invest it in communities this year, especially if you can’t attend the public hearing on Oct 4. Find your alderperson here. 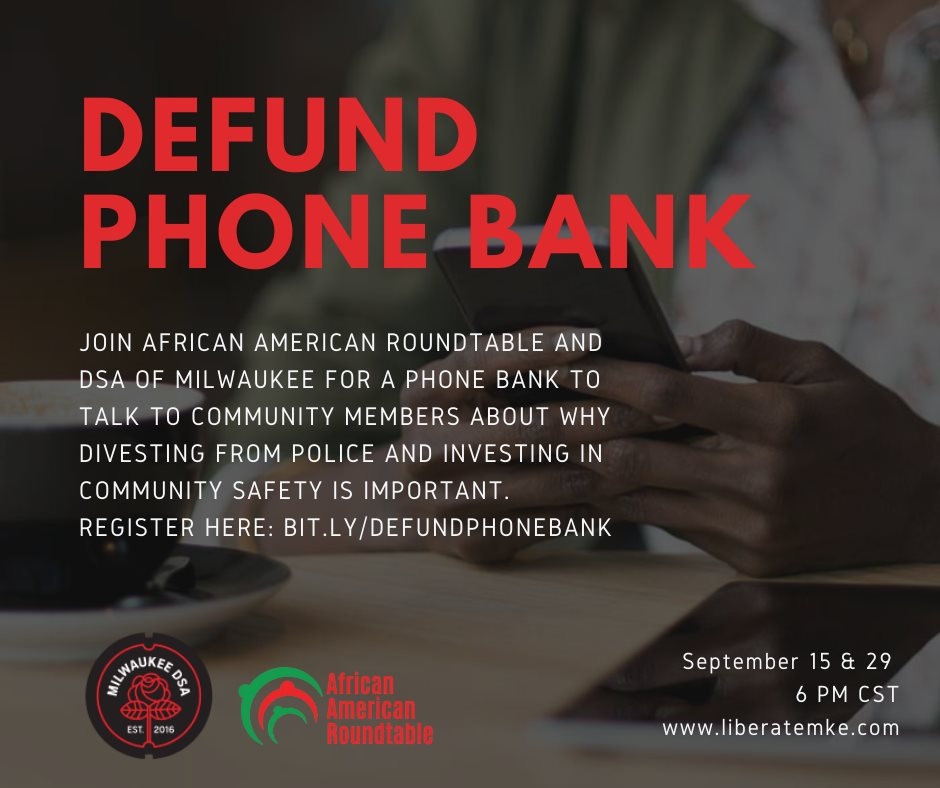