People have overwhelming come out to say: we want fewer cops, and more investment in people and communities. But right now: our work is at risk!

Politicians in Milwaukee are making decisions that will either continue the city’s carceral and white supremacist approach to public safety, or depart from it to invest in people and communities. This is a time when we need the whole city talking about the budgets, and particularly about defunding police. If you haven’t contacted your local representatives yet, on both the city and county level, now is the time.

What’s at stake this week:

END_OF_DOCUMENT_TOKEN_TO_BE_REPLACED

Sheriff Earnell Lucas and his toady Ted Chisholm have been teaming up with private companies to exploit Milwaukee families for years. We can make them stop! At the county jail and house of corruption (HOC) people who want to talk to their families or eat halfway decent food need to use services provided at exploitative rates by private companies, who kick some of their profits back to Lucas and Chisholm at the county sheriff’s office (MCSO).

END_OF_DOCUMENT_TOKEN_TO_BE_REPLACED 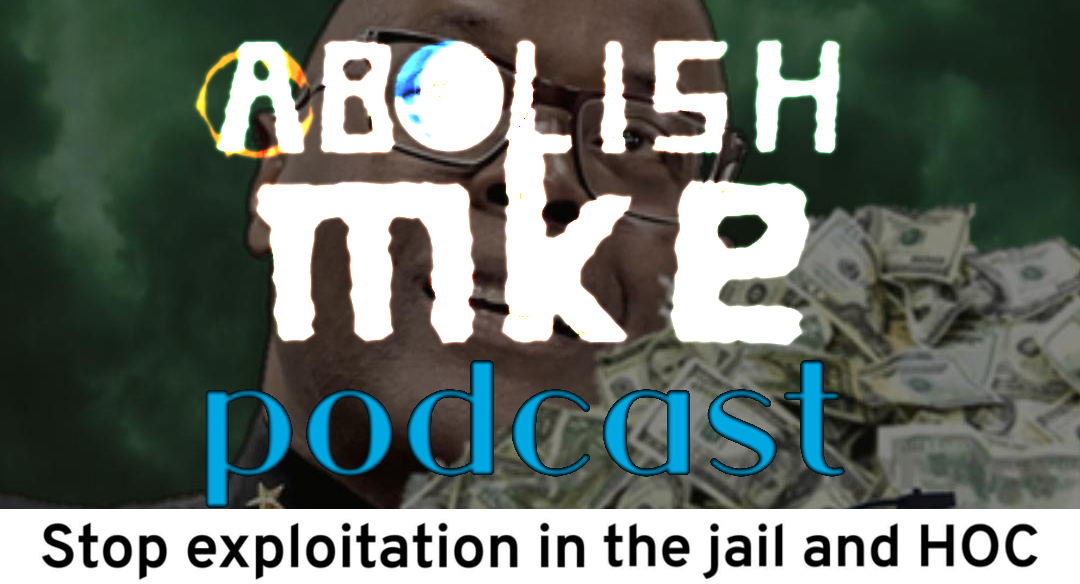 This is an audio version of “Stop exploitation in the jail and HOC” published at ABOLISHmke.com on September 20, 2021.

END_OF_DOCUMENT_TOKEN_TO_BE_REPLACED

Ryan Clancy, Milwaukee’s openly abolitionist county board member, has been busy. First, he’s introducing two resolutions that, if passed, will significantly reduce the harm of incarceration in the county jail and HOC. Second, he’s getting county board members to read and discuss Mariame Kaba with the public.

The first of Clancy’s resolutions will give 75 minutes of free phone time and 75 minutes of free video visitation time available to everyone held in either facility. The second will cap commissary prices, requiring that people held in these facilities be charged either the manufacturer’s suggested retail price, or only 125% of the typical price at a chain store in Milwaukee County.

END_OF_DOCUMENT_TOKEN_TO_BE_REPLACED

This is an audio version of “Abolition action at the Milwaukee county board” published at ABOLISHmke.com on September 7, 2021.

Music thanks to snag. snagmke.bandcamp.com

ABOLISHmke, news and analysis from a bad place. We write from an anti-authoritarian perspective on police, prisons, and more in the so-called state of Wisconsin.

We will publish anything sent to us that conforms to our editorial standards for authenticity, conflict, and rigor. Please do not hesitate to contact us with any questions: abolishmke [at] protonmail [dot] com.

There is an audio version of this article, which should also be available anywhere you can subscribe to podcasts. If you cannot find it on your preferred ap, contact abolishmke@protonmail.com.

[UPDATE: the finance committee meeting was postponed to Monday July 26, because of a sport, and Chisholm’s newest report has appeared. ]

Milwaukee county sheriff, Earnell Lucas has been breaking the law for the last few months. County ordinance 56.02 requires that government agencies with projections of a “deficit of at least one hundred thousand dollars ($100,000.00) or an overtime deficit of at least one million dollars ($1,000,000.00)” must file a report that “shall include the reasons for the anticipated deficit, as well as a recommended plan of action or alternatives to offset such deficit.” Earnell Lucas has exceeded the $3 million sheriff’s office (MCSO) overtime budget by at least three times a million every year, without filing adequate reports as required, by law.

END_OF_DOCUMENT_TOKEN_TO_BE_REPLACED

[UDPATE: The meeting happened Thursday June 17. Jason Haas put these items at the very end of the 31-item agenda, requiring everyone who wanted to testify to wait on the phone 7 hours for the chance. Only Ryan Clancy’s proposed right to council for eviction defense had as many public testimonies, Haas scheduled that as item 25. It passed. Haas also tried to invoke parliamentary rules to silence Clancy on the CART program. When that failed, he invented new rules. Willie Johnson Jr took over chair duties during the discussion of sheriff overtime. He refused to acknowledge at least one of the submitted eComments because it brought up the spurious origin of Ted Chisholm’s position as MCSO chief of staff. We’d counter that Chisholm gaining his position through nepotism and cronyism seems directly related to his inability to write an acceptable report.

-For overspending, Chisholm’s report was again rejected because the only “solution” to overtime overspending he proposed was everyone giving them more money. The vote was close: Clancy, Taylor, Liz Sumner, and Joseph Czarneski were in favor of rejecting the report. Haas, Johnson Jr, and Shawn Rolland wanted to let Ted Chisholm and MCSO off the hook.]

The people of Milwaukee want less of our money going to law enforcement, but county officials are letting sheriff Earnell Lucas rake it in. Unsatisfied with their generous budget, the Milwaukee county sheriff’s office (MCSO) has a habit of overspending on overtime. They’ve also worked to take in money allocated for mental health and tried to control the shift to more humane and effective approaches to public safety. Amidst all this resource-hoarding, Lucas is also working to silence his most vocal critic on the county board.